1. Playing with the layout a little tonight. Not sure what to think, but I don't really have much time to spend thinking about it, so perhaps it's a moot point. Really, I'm just procrastinating a bit. I should be writing about William the Conqueror or grading exercises on simple, compound, or complex sentences. (That last one would be a simple sentence with a compound verb. Wait, was that an unclear antecedent? Wait, what was that? No, What's on second. Oh yeah...)

2. Strangely enough I do not dream in grammar or history. Tonight I might have strange dreams, though: one of my students showed me how he could pick his nose with his tongue. This moment came after another boy wanted me to touch his knee to feel the strange spot on it that he can make pop. I declined. Recently a third grader offered to let me check him to really see if he had a cold. I assured him I would take his word for it. Older students have their own kind of weirdness, but I can't really think of any right now.

3. I finally tried a cakester today. My daughter (who is my student) called me a traitor, while her friend called me a cake-sniffer (inside joke for you Lemony Snicket fans). Last year our little school divided into factions over the cakesters and actually made signs that they carried around that said things like, "Down with cakesters!" I have to confess that I now side with that faction.

4. Today's art class had it's own moments of weirdness, nose conversations aside. What began as finishing a pop art assignment ended as an impromptu lesson on Jackson Pollock and a lot of noise. Some days I prefer the lessons that involve slides and quiet, but it's always fun to watch the students jump into the spirit of an assignment and discover something they enjoy (did you catch that subordinate connector that sets up contrast? We learned about that in writing lab today). I was especially pleased when one student told me he had planned his harmonious color scheme. Yes, they do listen through the noise!

5. I guess William is waiting for me. I'm almost done writing out the notes, and I like history, so there really is no good reason to not dive in. My brain is just tired. I never realized how much work has to be done outside the classroom until I became a teacher. The work just never ends. 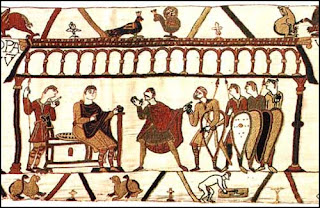