NO Soliciting! And I Especially Mean Your Advice!

The world would be a much better place if more people could understand that unsolicited advice is usually just a cover for hurtful criticism. A recent conversation has left this thought spinning around in my head like an out-of-control top as it hits on all the tender places in my heart. (There aren't many tender places in my heart, so it really isn't good to damage the few that I have...)

Really, let's examine this concept for a moment or two. How often is the unsolicited advice about something like how to rid one's home of ant invaders in the spring time or how to properly wash a cast iron pan after burning dinner into all those little cast iron pores? More often the advice is about how to deal with the problem (that one didn't know one had) with one's favorite aunt (whom the critic doesn't like) who is coming to visit in the spring, and really all one wants to do is whack the critic with said unwashed cast iron pan. Anyone have any advice about how to refrain from such violence when confronted with such a situation? Just to be clear--I am now soliciting!

Criticism is received with so much more grace when the door has been gently opened, by either the critic or the receiver. When the advice isn't wanted it often doesn't fall on the proverbial deaf ears. Instead the advice falls with all the grace of a bowling ball onto a land mine. I don't even want to contemplate the end result, but if one is over about the age of twelve, one can probably fill in with a vivid enough mental picture. Of course, if we were all living in a P.G. Wodehouse novel, great hilarity would ensue, but unfortunately most of us live in the darker section of human nature that more closely resembles a Shakespearean tragedy where we are left brooding like a Danish prince. 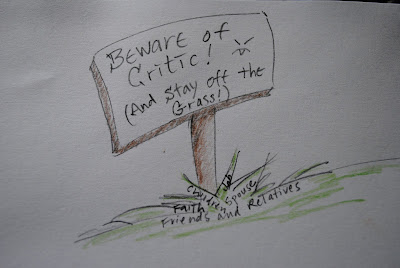 It's human nature to want to fix things, but why is it so much easier to fix other people's things than our own? And it seems to be especially true of things that we have no experience of in our own lives. "I know I've never been in your situation, but if I had been this is what I would do..." While the book of Proverbs in the Bible does tell us in many, many, many (did I tell you how many?) places to listen to advice and accept instruction, there is another place in the book that tells us to pull the plank out of our own eye before fiddling with the speck of dust in someone else's. True advice isn't veiled criticism.

The world would be a better place if more people could learn to tell the difference. That's all.

Tune in next week, when I discuss the true importance of people's opinions...

(This blog is getting classier; we've upgraded to color cartoons! Of course it is Sunday.)
Posted by larin at 6:50 PM

I have a very close relative whose life seems to revolve around giving unsolicited advice to one and all. This person is "just trying to be helpful," but the advice is invasive and sometimes makes one feel like a first-grader. I watched this behavior with growing dismay over the years, until finally I distanced myself from that relative because I just couldn't stand it anymore, and the advice-giving was getting worse. At the same time, I recognized the same tendency in myself (and my loving husband helpfully pointed it out - wait, is that unsolicited advice veiled as helpfulness?). I've been trying to address it. I've progressed to the point of mostly remembering, when my sons or others share their problems, to ask, "Are you venting, or are you asking for my opinion?" Where it remains a problem for me is my opinion that I usually have a better way of doing most things around the house, and "helpfully" advising my husband how to do those things. Then he helpfully points out that he doesn't need my help or advice. One of these days, I'll get it...

I have to confess that I have also struggled with this issue, as in being the ever-so-helpful advice giver. Over the years I have made a concerted effort to stop making such a nuisance of myself in this way. Like you, I try to ask before offering, but still forget at times. I can even let my husband turn the wrong direction when we're traveling somewhere without mentioning it to him. Of course sometimes it's not that he has turned the wrong way--it's just that it's not the route I would have chosen, which crosses the line of opinion. Opinion is the crux, is it not? And yes, it is hard to keep quiet when I feel like my opinion, I mean, way, is better.

Now to teach the children the same skill.