Why Is There a Snail Next to Gabriel?


One of the things I love about the Christmas season are the lovely greeting cards people send each other. For many people it is their only exposure to the beautiful art of the Renaissance and Baroque periods and to paintings with religious themes. Recently in my grammar art classes we have been looking at the Christmas story as told in art and in the logic and rhetoric painting classes students have been painting Medieval Christmas images. Most of us are familiar with scenes of the Nativity, but there are many paintings that tell other parts of the story, too.

In the book of Luke, the Christmas story begins with Gabriel telling Mary the good news that she will be the mother of the Messiah. These scenes are typically referred to as "Annunciation" paintings and obviously include Gabriel and Mary. However, many of these images also contain other objects that may leave us wondering. Why is there a snail in the front of Francesca del Cossa's version (seen at right)? While viewers today may be stumped, viewers during the Renaissance would have been familiar with the many symbols that we look past or scratch our heads at in these paintings. The snail was thought to live underground in the dark in its shell for three months of the year when it would re-emerge. If this makes you think of the time Christ spent in the tomb, you have solved the riddle. Many of the extra items in these paintings hint at the end of Christ's time on earth, even as His time in human flesh is just beginning. Lilies are an obvious symbol, but take note of how many there are in a painting. Not only do they refer to Christ's death and resurrection, but if there are three of them then they refer to the Trinity. While three is also a visually pleasing number, many instances of three are meant to be symbolic of the Trinity: three windows in a background, three divisions in the architecture, three vases on a table. Colors also have great significance in Renaissance art. Mary is typically depicted wearing blue because it is a heavenly color. White objects frequently refer to purity and red is the color of Christ's blood shed for us.

While viewing the Annunciation images, students noted that not only were there many recurring symbols, but the storyline of the paintings rarely varied. Traditionally Mary is depicted as being interrupted in her devotions by Gabriel's visit, so she is usually seen kneeling with an open Bible nearby. Luke 1:26-27 says, "In the sixth month, God sent the angel Gabriel to Nazareth, a town in Galilee, to a virgin pledged to be married to a man named Joseph, a descendant of David." It really doesn't say what Mary was doing--she may have been sleeping, which is how one Henry Ossawa Tanner painted his version (look back a couple posts to see his version). Which also brings up the quandary of what really is Biblical versus what is simply traditional. Well, the best way to find that out is to open one's Bible and read for yourself, but we do talk about these things in class. Lilies aren't mentioned in the Bible, and neither are haloes, which are always of interest to students. One of the most common questions I am asked is why some of the people have gold circles around their heads. We discuss that this is an artistic device to set apart the saints in the image; then we talk about how the Bible defines saints (all believers). But then, just when the students grow used to seeing the haloes we see a painting that doesn't have them and the question becomes why aren't there any! If you pay attention to the haloes, you will notice that Christ's frequently has a crucifix in it because He died on the cross for us.

This fact created quite a stir when we viewed Nativity images by Duccio and Giotto (shown at left), both of which show two babies with crosses in their haloes. Only the kindergartners solved the dilemma on the first try--there are two baby Jesuses in these paintings. That fact doesn't make sense to most of us, and since we are not familiar with such artistic devices these days it may leave us confused. The device is called simultaneous narrative, which simply means telling more than one part of the story at the same time, and was not uncommon in art of this time. One of Botticelli's paintings shows seven different episodes in the life of Moses--all in one scene. Many adoration paintings show the angel announcing to the shepherds and the shepherds arrival at the same time. Gentile de Fabriano's "Adoration of the Magi" (shown below) shows four moments in the story of the visit of the Magi. 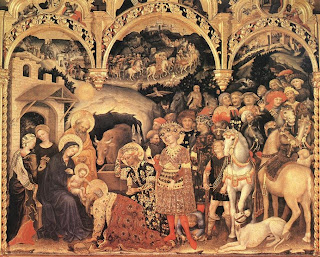 In annunciation and nativity images, however, we frequently find another device that is like simultaneous narrative, but instead of telling other parts of the Christmas story, reminds us of why Christ came. In addition to symbols that refer to the 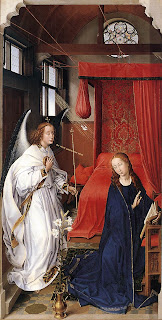 crucifixion and resurrection, there are sometimes hidden references to the sin in the garden from which arose the need for a Saviour. Rogier van der Weyden's panel from the Columba Altarpiece (at left) shows Adam and Eve standing under the tree carved into the wooden furniture on which Mary is kneeling. But these references can be found in many paintings from this time period. If there is a stained glass window or carved sculptures or small figures in the background of a painting they bear close scrutiny and you will frequently find an Old Testament story told and many times it will be the story of the first couple on earth, reminding us of why Jesus has come.

I could write pages and pages about the many symbols found in just the Christmas story, but suffice it to say that if there is something unusual in the painting, it probably had meaning--even if we don't understand it now. If you have any questions a short search on the internet will usually turn up answers, or leave a question in my comment section--I'll try to find the answer and get back to you. A couple other important symbols to note are the dove of the Holy Spirit that descends on Mary and bare feet, which are a sign of holy ground. For a quick rundown: dogs represent faithfulness and loyalty, cats slothfulness, magpies Christ's suffering, irises sorrow and columbines were thought to look like the dove of the Holy Spirit. See if you can spot all these things when you peruse paintings. Merry Christmas, and may God bless you greatly in the year to come.
Posted by larin at 10:37 PM

I really enjoyed this short lesson! You made art history enjoyable, and I'm waiting for you to upload the images. I'll look a lot more closely at religious art now - wish I'd known all this when Scott and I were at the National Art Museum in DC last winter.

Thank you for posting all of this! Great art lesson. I didn't know a lot of that. Merry Christmas!

I really enjoyed reading your lesson. Religious art is beautiful and the symbolism is majestic. Many symbols are evident from Bible readings, but others such as the snail, have gone unnoticed by me. Also, bare feet on holy ground is another symbolism I hadn't noticed. Thank you.

Pallas, thanks for stopping to read and to comment. Truthfully I hadn't noticed the snail either--my kindergartners did, so then I had to find out why. They keep me on my toes.

BTW, in that same painting there is what appears to be a woman looking out of a window in the background. Typically anyone looking out and making eye contact with the viewer is either a self-portrait by the artist or a portrait of the donor, which I think is the case in this painting. The kids love looking for people making eye contact, too. Merry Christmas! --LaRinda

Jenny, if you ever have questions about what other things mean in paintings, I have some great books that cover symbols in art. I would love to go to the National art Gallery--lucky! ;-) --LaRinda

Linda,thanks for stopping to read and to comment. Just a couple years ago I didn't know most of this either! I love learning it, though. These are the details that make art history more enjoyable for my students. Not everyone can look at a painting and savor the aesthetic qualities (especially the kids), but to know the hidden meanings makes it exciting. Merry Christmas! --LaRinda

Many of the images we see in these paintings refer back to ancient Latin hymns which we no longer sing - sometimes they compare Mary to Eve, Jesus to Adam, etc. They would have been better known when these paintings were new.

Stephen, thanks for the info on the Latin hymns. I know a lot of paintings and details were based on stories form "The Golden Legend" which told stories like the history of Mary's parents. I talk with the kids about what are Biblical details and which are traditional ones for this reason. I love how people at that time would have understood the references and wish we understood them better today. I really believe that if more people knew these things they would enjoy the old paitnings more. The lack of knowledge makes the paintings less accessible to many. Thanks for stopping by and merry Christmas! --LaRinda