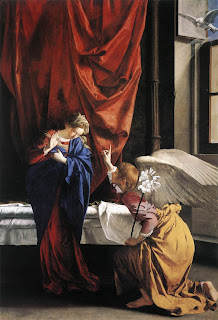 This is one of my favorite Annunciation paintings. I love the bright colors and the dynamic composition as the eye moves down the sweep of the curtain to the line of Gabriel's back, then back up his arm to Mary's face, where our gaze comes to rest. Her humility shows on her face as she ponders the angel's greeting and the news. Notice the dove of the Holy Spirit entering at the window above and the rays of light that signify God's presence. The lilies are a reminder of how Christ's life will end--in the pain and death of Easter, but also in glorious resurrection. Mary wears the traditional blue outer garment, which symbolizes heaven. Gabriel is bare footed, reminding us of God's command to Moses to remove his shoes because he was treading on holy ground. Altogether it is a very graceful and peaceful image.

"Now in the sixth month the angel Gabriel was sent by God to a city of Galilee named Nazareth, to a virgin betrothed to a man whose name was Joseph, of the house of David. The virgin’s name was Mary. And having come in, the angel said to her, “Rejoice, highly favored one, the Lord is with you; blessed are you among women!”

But when she saw him, she was troubled at his saying, and considered what manner of greeting this was. Then the angel said to her, “Do not be afraid, Mary, for you have found favor with God. And behold, you will conceive in your womb and bring forth a Son, and shall call His name JESUS. He will be great, and will be called the Son of the Highest; and the Lord God will give Him the throne of His father David. And He will reign over the house of Jacob forever, and of His kingdom there will be no end.”

Then Mary said to the angel, “How can this be, since I do not know a man?”

And the angel answered and said to her, “The Holy Spirit will come upon you, and the power of the Highest will overshadow you; therefore, also, that Holy One who is to be born will be called the Son of God. Now indeed, Elizabeth your relative has also conceived a son in her old age; and this is now the sixth month for her who was called barren. For with God nothing will be impossible.”

Beatutful post. Did you know this was painted by Artemesia Gentileschi's father? She is one of the first acknowledged female painters. Fascinating character. Susan Vreeland wrote a semi fictional account of her life: The Passion of Artemesia.

Thanks Virginia. Yes, I did know Orazio was Artemisia's father. Since most of her well-known paintings deal with Judith or Susannah, we haven't looked at them much in my classes, which is a shame, because they are beautifully executed. I'll have to check out the book--thanks for the tip. Someday I'll find the right chance, though. --LaRinda :-)