The wild, wild world of art 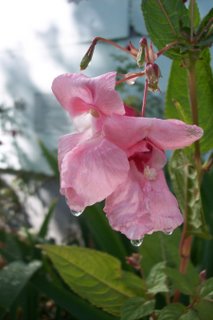 My daughter's school asked me to teach art. Without a curriculum. Three times a week. To 39 7-10th graders all at once. Who in their right mind would turn that down? Well, yeah--just about everyone but me! So, while the local college's art program director spent quite a bit of time tellilng me I'm doing what can't be done, I'm busy doing it. What's the verse? With God all things are possible. (Matthew 19:26) I'll just keep telling myself that. :-)

There's a lot of variation in skill and in interest in the class (as I suspect most junior high/high school art classes contain). We've covered some fun basics so far and are working on some lettering assignments this week. I just love letters, typefaces, words, etc. That's why I went into graphic design--typesetting. I had favorite letters in kindergarten. That's right--my dad didn't understand it either, but some of them are just prettier than others. My apologies to all of you who love P and U and O and B. But A and Q and R are just all so much more shapely. And G, who couldn't love a little g? There's just so much potential in it (although I will confess, my love of G came much later in life--that was a developed love). Now how do I communicate this to a class of kids who suspect that my sanity cells are not all present? Actually I was surprised at who took to this assignment and who didn't. Several of the students want to learn graffiti lettering (is that spelled right? See, it's so far outside my world I don't even know how to spell it!) and I'm sort of torn on this one. As a lover of grunge typefaces (especially with certain Bible verses--I love the tension it creates and the way they reach out when set in a way we don't expect), I'm intrigued. As a parent, I'm concerned! :-O I haven't decided on my answer yet. Maybe we'll just move on to mosaics quickly! 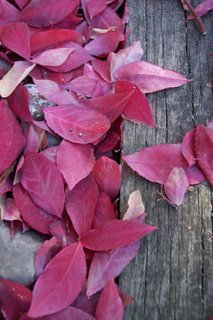 Other wildness in my world has included soccer. Yes, we've made it almost all the way through soccer season and this is the first time I've mentioned it. I've just been so busy. Our little man did four-year-old soccer, which has moments of absolute hilarity. To see a team of little boys run down the field and all fall down at once--totally away from the vicinity of the ball!--is just too much fun! Scoring in the wrong goal, parents running with their children to get them to play, sound effects as they kick the ball--oh my goodness, what a hoot! 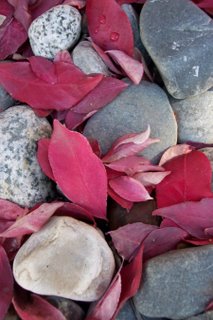 Now the older kids--they're something else. I'm amazed at how quickly the competitive spirit grows. Our team has been playing for four seasons now and they've really grown. We still split our season between losses and wins/ties, but we always seem to beat the really hard teams and lose to the easy ones, so I guess that shows their heart. Our team is known for being very kind and caring on the field, while still being tough competitors, which is awesome. We've had other parents comment to us and ask about our school, which is such a wonderful praise to God. The girls' spirit really shows Him. Our team is also known for having the loudest parents! But in a good way, which is also a wonderful praise. We've never had any negative or put downs, although we do sometimes bite our tongues when we encounter teams who engage in bad sportsmanship. It is always nice when our girls notice the difference and comment on purposeful elbows being thrown and put downs on the field. They don't retaliate, they just play harder. Such a good group of girls. I wish I could post more pics of them, but in this strange era in which we live, backs with no details will have to suffice. This was a cold game, as you can tell by the snowsuit under the jersey! 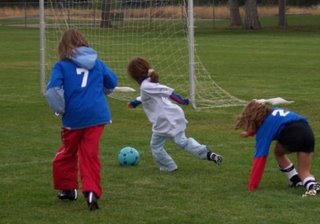 Wild art. Wild soccer. Wild housekeeping. My home is currently overrun by books. I think we have about 50 checked out on two cards. We're thinking about just taking our wheeled suitcase to the library instead of the bookbag. I mean, why ruin a perfectly good bag; besides I made it (one of those quilted inside out jobbies) and there was a ton of snipping there! Bags of tomatoes. If you want a prolific producer, get a black pearl. Nice and tasty and tons of them. Sunsweet tastes better, though. They are like candy--the kids go out and just eat them straight off the bush in the summer. There were weeks when I thought it wasn't producing, but it was just that the kids ate every single one. Anyway, now the whole mess resides in six grocery bags that I have to brave tomorrow. Remember the fuzz? Surely I can find something better to do--maybe I can bathe the neighbors cat or something... ;-) 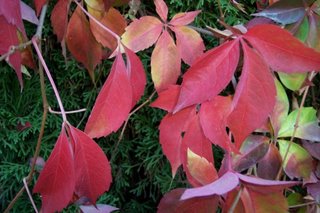 And someone still needs to sew costumes. Hmm, most likely not going to be my husband. Guess I'd better add it to the list. Usually I try to better integrate my photos with my musings, however, not tonight. I am wondering why we would have lightwaves, colors, and eyes to see the beauty of fall if we evolved. Of course I know why: because we didn't evolve! So, ponder that thought while I share the beauty of autumn. As a side note, while sharing some photos to teach composition, the students were amazed to learn that since January I have taken over 3,000 photos. So was I!

And now I'll leave you with one of the few projects I've worked on lately. This was a little bird that our dog carried around one day. He's a bird dog with a soft mouth and the little chirper was unharmed, so I took photos (what else would I do!). Blessings to you wherever you are! Hopefully I'll be back sooner rather than later. And remember, with God all things are possible. :-) Ask me--right now I'm living it. 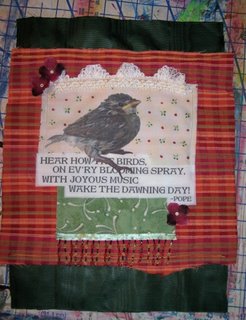 Hi LaRinda,
You know busy is as busy does, and I guess thats you, think about it I am sure you would not have it any other way.
The pictures are beautiful, and for those little one playing any kind of game, always too funny to see what can happen.
Suzanne