Well, we've had spring break this last week. At the beginning of the week I told our daughter that we were going to do some house cleaning during the week (including the dreaded going-through-of-the-room routine) and that we each needed to learn something new. I'm happy to say that we each learned something new. :-)

She embarked on the path to learning a couple new skills: playing the piano and sewing. Her 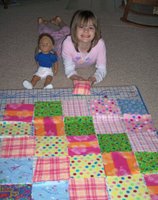 week included learning and practicing finger exercises and making a quilt top. It did not, however, include the dreaded cleaning-of-the-room. So much for good intentions. I suspect it will wait until summer now, and of course we have so much more time to procrastinate in the summer! ;-) Truthfully it will most likely happen much sooner since I need to seriously curb the packrat tendencies already apparent before they reach grander proportions.

And speaking of packrat tendencies, I did get some of my studio stuff moved back to its proper abode. The dining and living rooms are slowly returning to a state of normal livability. Although I had originally planned to have some much longed for creative time once the taxes were 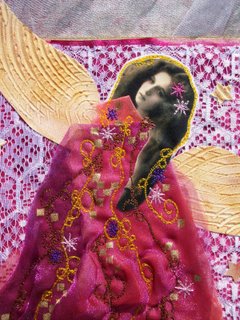 finished, it didn't materialize until the end of the week. So what were the things I learned? How to blog (!) and I finally mastered free-motion embroidery (commonly known as FME). My wonderful creative day allowed me to create a Klimt-inspired angel that I sketched out recently. She is now sold. This picture shows a detail. 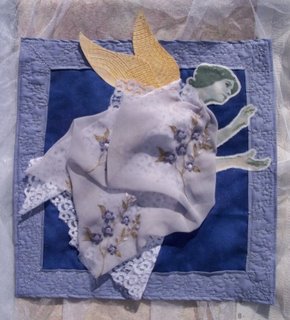 projects to work on. ;-) At the bottom of the pile on my desk I found an angel that had been the ill-fated victim (and I mean that word this time!) of metallic thread in my Singer with a fabric with too much stretch. Puckers in the border and silver thread goofs made their presence too known to be pretty. But now they are camoflaged with a lovely silver spiraling border. I still don't think she's good enough for sale, but I've always liked her and she matches my bedroom. Very convenient, don't you think? Me too. :-)

And what about our little boy? Did he learn something new, too? Well, at his age he's learning something new just about every day, but this week we worked on learning to NOT throw fits. On a more fun note, he is learning to shoot hoops. Living near Gonzaga, we watched most of the college basketball playoffs lately. So at different times he has been Gonzaga, George-Mason, UCLA, Connecticut, whatever team he remembers as he shoots. LOL!

My husband--well, I hope he learns to cut his fingers less as he installs siding! :-O

Blessings to you!
Posted by larin at 9:06 PM