Last year my favorite name from history was Vindex. Of course, you have to know that in Latin (and this fellow was a rebellious Roman senator) a V is pronounced as a W. I know, silly, but hey, the seventh graders loved it.

Well, as of yesterday I have a new favorite, also from Roman history. Meet Mettius Fufetius. An unfortunate fellow, Mettius Fufetius was the leader of Alba who decided to betray his alliance with the Romans during a battle. But he was outmatched in intelligence by his opponent, Tullus Hostlilius. Is it just me or does it seem really unwise to fight a man named Hostilius? At any rate, the betrayal was a stupid (are we still allowed to use that word?) choice and ended with Mettius Fufetius being executed in a fashion that Livy says "was the first and last time that fellow-countrymen of ours inflicted a punishment so utterly without regard to the laws of humanity." Poor Mettius Fufetius.

Roman history is full of interesting, unusual names like Scipio Africanus (nothing poor or stupid about him!) or Quintus Quinctius Cincinnatus or Publius Manlius (another seventh grade snicker inducer). Another name new to me this year that could be a favorite is Spurius Fusius, appointed Roman spokesman of a compact that Livy says was "in a long metrical formula, which is not worth the trouble of quoting here." The compact was before the battle between the Horatii and the Curiatii, which is a story that is worth the trouble quoting, to, um, well, coin a quote.

As I leaf through Livy there is no shortage of names that sound slightly silly to us today. But I remember reading Wonder Woman comics from the 1940s when I was a kid and being surprised at the old-fashioned quality of the names that were then only 30 years old. I'm sure the Paulines and Abigails of that era didn't feel old-fashioned any more than the Romans sounded silly. And names aren't the only things that go in and out of style, later seeming foolish, humorous or bizarre--orange shag carpet anyone?

Hmm, do you think Mettius Fufetius wore bellus-bottomi? (Sorry, Matt J., but only a little.) 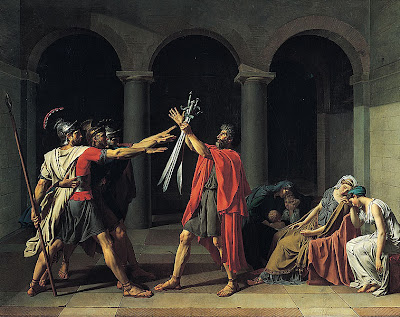 Painting of "The Oath of the Horatii" by Jacques-Louis David.
Posted by larin at 8:55 PM